After a car accident, money will be on the forefront of any victim’s mind. After all, even if their injuries were minor, they’re dealing with medical bills, car repairs, and a serious disruption to their personal and professional life. So how Much Should You Expect From Your Car Accident Settlement In California?

If you’ve never hired an accident attorney or filed an insurance claim before, you may have no idea what to expect or how much money you are entitled to.

On this page we’ll give you a realistic idea of how much compensation an injured victim can expect from a settlement.

First, let’s be clear about the terms and legal lingo we’re using: A settlement is an agreement to pay someone who has suffered injury or harm in a car accident. It’s called that because it settles, or closes, the case.

For a driver to be found at fault, they must have been liable for causing the accident. Their actions must have been negligent in some way. There are tons of negligent actions, but they all have one element in common: they violated an appropriate, safe level of driving.

Drivers need to obey laws, be aware of traffic patterns, act sensibly, and make sure that their cars are safe to drive. Failure to do one or more of these things constitutes negligence, and this careless behavior is why so many of our neighbors are seriously injured or killed on our roads every day.

One of the simplest examples of negligence occurs during one of the most common accidents. When we are first learning to drive, we are all cautioned that drivers need to leave enough space in front of them to safely stop in case the vehicle in front comes to a sudden halt.

It doesn’t matter whether the car stops short because a dog runs in front of it, another car suddenly changes lanes, the car turns a corner and sees a traffic jam, or even because the driver has a heart attack. If the driver has followed traffic laws and left enough space, the car in back should be able to stop in time!

However, as most of us know, it’s all too common for other drivers to tailgate and not leave enough space. This is why rear-end collisions are one of the most commonly occurring car accidents.

While the law states that drivers shouldn’t follow too close, it’s nearly always the fault of the driver who hit the back of the other car—even if the other driver slammed on their brakes for no good reason. The driver in the back didn’t adhere to the law and is thus typically found at fault and held liable for any injuries stemming from the accident.

There are several ways of determining who is at fault in an accident. Law enforcement will arrive, survey the scene, look at the trajectory of the vehicles, and talk to everyone involved. Officers will issue a police report, which can be used as strong supporting evidence if you bring a case, either personal injury or an insurance claim.

The more persuasive the case that the other driver was at fault, the better the chance of a fair settlement.

A settlement DOES NOT require a court trial. Even if you bring a personal injury case in civil court, it is very rare for car accident cases to go to trial. Why? Because early phases of the case usually provide sufficient evidence of who is at fault.

The other side (the defendant) and the defendant’s attorney generally realize there’s no point in a court argument, because a judge and jury are unlikely to side with the defense. At that point, defendants are usually willing to settle, meaning you’ll get the compensation you really need!

What’s Included in a Settlement?

When you are injured in a car accident where the other party is at fault, you are entitled to receive compensation for damages that you’ve suffered.

There are two main categories of damages: economic and non-economic.

Economic damage applies to anything that essentially took money out of your pocket, from paying an emergency room bill to losing days off work for medical treatment or recuperation.

Non-economic damages cover the emotional side of an accident and injuries, including pain and emotional suffering, disability, disfigurement, etc.  We can tell you from experience: sometimes these non-economic losses can be overwhelming and catastrophic.

So, to recap, economic damages can include costs for:

Non-economic damages often include the costs of:

Okay, But How Much Will I Receive in a Car Accident 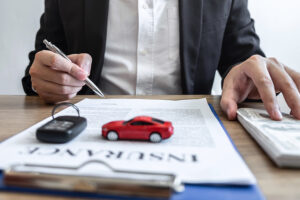 Now that we’ve provided the background info, we can discuss how the amount of the settlement is calculated in a car accident.

Settlements in a car accident are definitely not one size fits all. In other words, a certain injury doesn’t equal a certain amount.  There are many variables involved.

Every accident victim will have a different experience. Even two people who suffer the exact same type of injury in a car accident will likely differ in the following ways:

Aside from how your body responds to an injury, the amount of a settlement depends on a number of other factors. This includes the sum of the bills you’ve received, your salary, expert testimony on whether you can return to work, expert testimony on expected future medical expenses, and the amount of pain and suffering you’ve endured and may, unfortunately, endure in the future.

Other factors may include the effect of the injury on your daily life, both now and in the future. Some injuries, such as spinal cord injuries and traumatic brain injuries, can affect one’s ability to ever move independently again, which can affect both life activities and the ability to hold a job.

These types of injuries are often called CATASTROPHIC INJURIES, simply because their impacts on all aspects of life are so great. Victims of catastrophic accidents may need medical care for the rest of their lives.

Your settlement amount can also depend on the negotiating skills of your attorney. Your car accident lawyer will keep negotiating until a just offer is received, and not just settle immediately. Why?

Because the amount of a car accident settlement is determined by looking at averages of other settlements and resolutions for similar incidents with similar injuries in the same venue. 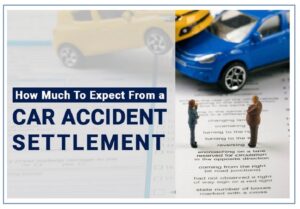 The first step is to calculate your economic damages. This is done by adding together all the bills for medical costs, expected medical costs, and property damage.

Then, we add your existing wages lost from work and expected future lost wages. These numbers depend on how much you make, how long you were out of work, and how much longer you’re expected to miss work.

The second step is to review and calculate these damages based on a number of factors typically applied, as discussed above.  These calculations can be extremely complex, and vary from county to county.

Here’s a good tip: NO MATTER HOW BAD YOUR PAIN IS, INSURANCE COMPANIES ARE GOING TO DOWNPLAY IT!

It’s easier to understand if we look at an example. Let’s say that you fractured your left arm in a car accident caused by another driver. Your medical bills are $5,000 in total. When an insurance adjuster looks at the breakdown of economic costs, they see a minimal number of events. In their view, there’s just an ambulance to the hospital, treatment for your arm, prescription medicine for the pain, and perhaps one or two days lost from work.

However, the accident was traumatic for you. We know this, but in the view of the insurance companies, given the severity of some other injuries in car accidents, the pain and suffering that you faced was comparatively minimal.

The insurance company will treat you like just another case number, offering you the smallest possible amount they can and hoping you’ll sign away your rights. This is why you need a car accident attorney who will treat you with the respect and compassion you deserve during this difficult time.

Remember, you need to ACT FAST as the statue of limitations is very straight forward.

Are There Any Other Factors That Affect the Amount of Settlement?

The location of the accident, the amount of treatment, as well as even the consistency of treatment also come into play. Your best bet is to get a qualified and experienced attorney involved as SOON as possible after an accident, so they can guide you through the process and advise you how to best maximize your recovery.

See a medical professional as soon as possible after a car accident. A doctor should check you out thoroughly. You don’t have to be bleeding to be severely hurt; some dangerous injuries such as punctured lungs or concussions present no noticeable symptoms initially. Many people don’t realize that the pain or ache they feel after a car accident is actually a serious injury with devastating effects.

While the primary reason to see a doctor immediately is for your health and safety, you also want to avoid being in the position of an insurance company perceiving the lack of medical attention as a sign you weren’t severely injured. They’ll do anything they can to dismiss, diminish, and invalidate your pain. Ensuring the prompt diagnosis and treatment of your injuries is usually the key component to recovering everything to which you are entitled.

Check out our testimonials to see what we can do for you, and if you need further assistance and advice, please feel free to contact us at 818-784-8544 for immediate help.

Check out How Do Car Accident Settlements Work In California

Check out Settlement Tactics Of Insurance Companies After A Car Accident